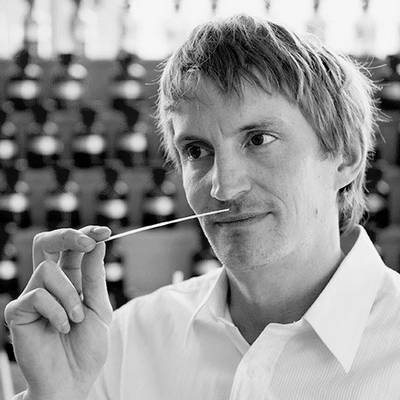 William Fraysse: perfumery, a family storyPerfumery is not a job like any other. It is an art in its own right which results above all from an extreme passion for smells. Therefore, it is a profession that is often passed down from generation to generation. Many current perfumers have acquired their know-how from their relatives, also working in this field. William Fraysse is no exception to this great tradition of perfumery. He comes from a large family of perfumers, whose notoriety goes far beyond the borders of France. William Fraysse is indeed the grandson of André Fraysse, famous creator of the Arpège perfume by Lanvin. He is also the son of Richard Fraysse, an inseparable perfumer of the Caron house since 1998. You will understand, from an early age,

It was at the age of nine that William Fraysse designed his first sketches of perfumes, even presenting his class with a presentation on the subject. Year after year, his passion for smells has grown steadily. William Fraysse’s know-how is above all a story of transmission and heritage, which already promises to be perpetuated: William Fraysse willingly confides in passing on his passion to his young four-year-old son, who already likes to comment on the scents that surround him with his naive childish words.

The flight of William Fraysse

William Fraysse worked for a long time in the shadow of his father whom he considers his mentor. This past side that he learned everything before developing fully and standing on his own feet. Since 2016, William Fraysse has succeeded him in the workshops of the Caron house, after having signed his very first solo creation in 2015: Pour Un Homme Sport, a reinterpretation of a cult essence of Caron.

If William Fraysse has chosen to work with the Caron house, it is not only to follow in his father’s footsteps. Indeed, he claims to fully recognize himself in this luxury house specializing in Haute Parfumerie since 1904. Caron is not a brand that lets itself be guided by a rhythm of unbridled creation. Caron likes to take his time to make unique essences. However, for William Fraysse, perfumery is an art that requires patience. Caron lets it express itself fully and does not impose any constraints on its creation, whether in the choice of its raw materials or in the range explored. Caron could not be more clear on this subject and does not want “to slow down the possible to create the unexpected”. In his compositions, William Fraysse does do not hesitate to transport us to his world, often very inspired by travel. This reserved man with a very calm character can never hide the sparkle in his eyes when he approaches his greatest passion: perfumery.

Eau de toilette For a Man by Caron L’Eau Caron